In 1977, Father Desbois graduated with a degree in Mathematics from the Université de Dijon. In 1981, he entered the Grand Seminary of Prado, where he was ordained in 1986. During the same year, he obtained a masters in Theology from Catholic University in Lyon, France. In 1991, he published his Masters on religious history at Université Lyon II, in which he studied the memoirs of Antoine Chevrier.

In 1978, Father Desbois worked as a math teacher for the French government in Africa. He later worked for Mother Theresa in Calcutta, where he helped set up homes for the dying.

After being ordained in 1986 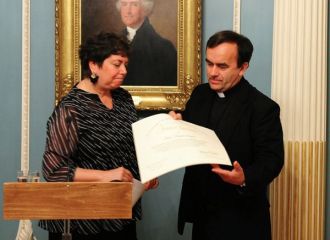 at the age of 31, he became the Superior of the Grand Seminary in Prado, Lyon in 1992. From 1992-1999, he served as Secretary of Jewish Relations for Cardinals Decourtray, Jean Balland and Cardinal Louis-Marie Billé. In 1999, he requested to work with the Jewish community of France, and was appointed secretary to the French Conference of Bishops for Relations with the Jewish community and an advisor to the Vatican on relations with Judaism.

In 2004, he joined leaders in the French Catholic and Jewish community in founding Yahad-In Unum (“together” in Latin and in Hebrew.) The organization’s purpose is to further relations between Catholics and Jews. Its largest and most ambitious initiative is to locate the sites of mass graves of Jewish victims of the Nazi mobile killing units, the Einsatzgruppen, in Ukraine and Belarus.

He is currently Director of the Episcopal Committee for Relations with Judaism, which is connected with the French Conference of Bishops. His work has been sanctioned by the Pope, recognized and encouraged by the President of France and supported in Europe and the United States. Desbois has been internationally recognized for his extraordinary efforts; his awards include the Medal of Valor by the Simon Wisenthal Center, the Roger E. Joseph Prize by Hebrew Union College, the Humanitarian Award by the U.S. Holocaust Memorial Museum, the Jan Karski Award by the American Jewish Committee, the B’nai B’rith International Award for Outstanding Contribution to Relations with the Jewish People and more recently, the National Jewish Book Award for his 2008 book Holocaust by Bullets (Palgrave-Macmillan).